Like I said yesterday, today was gonna be a bbq day.  WOOHOO!!

Got my slab of pork baby back ribs rubbed last night and ready to go.  This morning, I got up about 8:30, fixed up the old Weber Silver (WS) with the Smokenator and the IQ100 and fired that sucker up, set at 250 degrees.  I took the ribs out when I started setting up and let them warm a bit.

When the WS was at 250, I slapped the ribs on.  Now, ya’ll gotta realize that I’m getting into some kinda high tech (at least for me) bbq techniques.  I am using the IQ110 for temperature control.  It has a nice little probe that goes into the pit and attaches to the grill to monitor the temp of the grill and work with the fan on the IQ110.  Also, I’m using a Maverick thermometer which has a probe for the grill plus a probe for monitoring meat temp.  Add in the Smokenator and it’s an awesome bbq system (no, you don’t have to have all this stuff.  It was combined birthday, Father’s Day and Christmas presents to me.  I’ve cooked outstanding ribs without all the gadgets.  So can you!).  Here’s what it looks like with the ribs just starting: 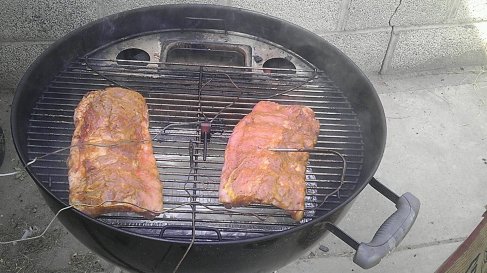 About a week before I started my blog here, I tried cooking a couple of slabs of ribs, using the WS and the Smokenator.  Six hours later, they were still kind of tough, so I finished them in the oven.  When I had my old Outdoor Kitchen keg cooker, I was able to get them done in about 2 hours.  Tender, juicy, high and fast.  I did a bit of research and talked with a friend and co-worker and came to conclusion I needed to “foil” the ribs (aka Texas Crutch) to get them really tender and juicy.

Today I put them on the WS, meat side up, for 1 hour after getting the Smokenator and IQ110 going.  Then I flipped them and let them go another hour after adding more water to the Smokenator.  I got a double layer of foil for each of the 2 mini-slabs and put the ribs in (of course, something had to go wrong.  I didn’t have any wide foil nor did I have any apple juice, but Sweetie went out and braved the insanity at our local supermarket and came home with both of them.  Thanks tons, Sweetie!  Love ya!).

I squirted a little Sweet Baby Ray’s regular bbq sauce on top and folded it all in the foil and closed it tightly except for one end.  I poured in about 1/2 C of Apple Juice into each through the open end and then sealed the last end good.  I put both rib sections back on the WS for an hour and a half (more water in the Smokenator).  I checked them at 1 hour and they weren’t quite as tender as I wanted, so I let them go another 30 minutes after adding water to the Smokenator.

After 90 minutes in the Texas Crutch, I took them out and placed them back onto the grill, yep, more water into the Smokenator.  I flipped them at 15 minute intervals for the next hour.  No additional sauce was put on them.  The water in the Smokenator kept the humidity inside the WS high and the ribs moist.

While the ribs were finishing off, I got my 2nd WS ready for indirect grilling and put on a few links of my pure pork Cajun smoked sausage, a seasoned chicken breast, a ribeye steak with Outback seasoning, and 4 kaftas.  Kafta is a middle eastern dish, usually made with ground lamb and Middle Eastern spices.  I used regular ground beef instead of lamb.   I flipped all the stuff on the 2nd WS at 15 minute intervals, too.  I put the kafta over the coals to cook.  The rest was laid out all over the cooler part of the grill.

Just before the ribs came out of the Texas Crutch, I fixed up a little bowl of bbq baked beans, some dirty rice (used both ground beef and chicken livers since it was my day!  LOL) and some deviled eggs.  I also sliced off a hunk of French bread, sliced it about 1/2″ thick and buttered and garlic powdered a little over half of it (Sweetie doesn’t do butter), wrapped it tightly in foil and set it aside.  When the 2nd WS stuff was about 15 minutes from being done (3 flips), I put the bread over the coals on top of the kaftas.  I did the steak and chicken via reverse sear.  The sausage I just let warm up and cook.  I didn’t have a thermometer to see how hot the 2nd WS was, but it was probably medium heat…400 or so.

When all was said and done, the ribs looked like this: 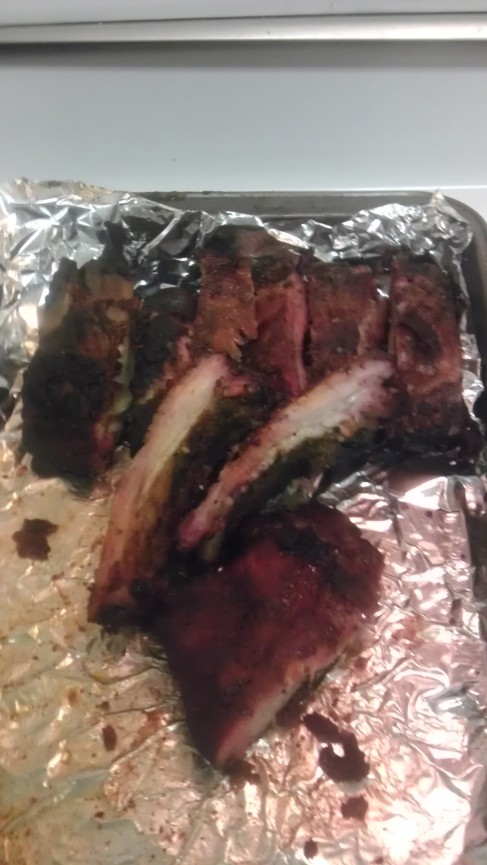 and the rest of the meat looked like this: 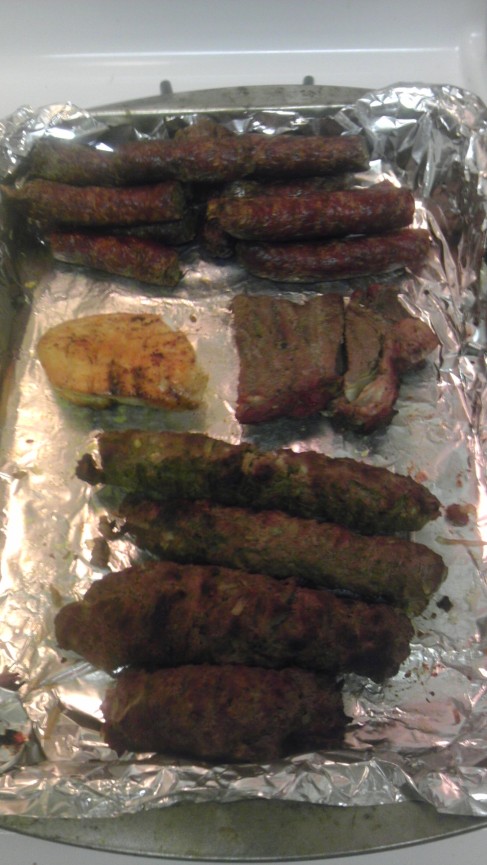 Plated out with the beans, dirty rice, deviled eggs and garlic bread, it looked like this: 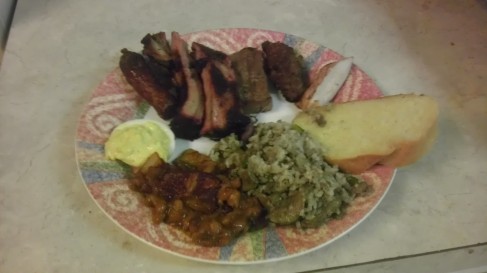 Sweetie only had one critique, “Don’t you change a THING!  This is PERFECT!”  Wow!  That blew me away.  Then I tried some.  Sweetie was absolutely right!  The ribs were juicy and so full of flavor they didn’t need any bbq sauce.  The steak and chicken were juicy and tender.  The kaftas were nicely spiced and a good addition.  The sausage…..well, the sausage is outta this world, even if I say so myself (yeah, I make it myself and cold smoke it myself.  LOL)

The beans, dirty rice, deviled eggs and garlic bread were the perfect sides for this meal.

Oh yeah, we finished off with a home made Cajun chocolate poke cake with home made icing.  Took about 45 minutes, start to finish.  Oh my goodness!  We never did get around to putting the Blue Bell ice cream on the cake, though.  LOLOL

During the cooking, which lasted from 9:30 AM to almost 4 PM, the temp outside went from 80 degrees to 108 degrees.  That called for a bit of Johnny Walker Red Label scotch on the rocks with a splash of water, of course.  OK, it called for several of them.  🙂

All in all, it was a darn good Father’s Day.  And it wasn’t heresy this time!  It was just darn good bbq.

Awright!  A very special day for all us Dads.  The perfect time to bbq and do it your way!  🙂

I’ve got a slab of baby back ribs all seasoned and marinating in the ice box overnight.  A few pieces of my home made pure pork Cajun smoked sausage thawed out and ready, some ground beef for burgers and to go in my dirty rice, a few chicken livers for the dirty rice, some leftover ribeye and chicken breast I cooked at a friend’s place tonight and had leftovers, and maybe a pack of hot dogs if I can find them in the freezer.  Some deviled eggs and bbq baked beans will round out the main courses with a nice home made Cajun-style home made chocolate cake and ice cream (Blue Bell, of course) for dessert.